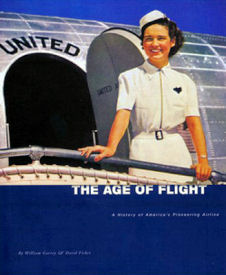 The Age of Flight: A History of America’s Pioneering Airline traces the creation of commercial aviation through the surprising contributions of United Airlines—perhaps the pivotal player in the key technological and customer service innovations that mark air travel today.

Written by David Fisher, William Garvey, and contributing author (and the book’s editorial director), Randy Johnson, The Age of Flight was among the most compelling coffee-table volumes to emerge with the explosion of interest in the centennial of the Wright Brothers first flight (hardcover, 256 pages, ISBN# 0-9667061-1-0).

No single airline has played a bigger role in the invention of commercial aviation than United Airlines—and this is the visually stunning untold story of those groundbreaking contributions.

United Airlines’ little known 80-year legacy of leadership includes industry firsts such as the United States’ earliest sustained commercial airmail flights and the first transcontinental passenger service. Other early airlines tackled international service first, but United’s technological and customer service leadership anchored the industry. United’s flying laboratory, the first ever, perfected such fundamental technologies as air to ground radio, wing deicers and an instrument landing system. A United captain pioneered the aviation charts we use today—and the list goes on, all the way to computerized reservations systems and today’s e-tickets. United’s customer service firsts just start with the invention of the stewardess—nurses who helped the wary public trust flight and later became icons of aviation.
One United stewardess (later called “flight attendants” when men joined the ranks) became the most decorated woman in US military history. 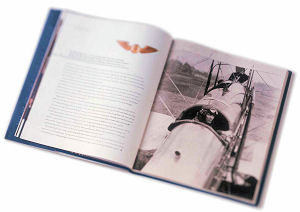 The Age of Flight is full of inspiring stories that put a new face on the creation of the global industry that more than any other has helped create the modern world.

The nation’s most popular museum is an aviation museum, so The Age of Flight was designed to engage the general reader as well as the aviation aficionado. Among the awe-inspiring photography and art is a specially commissioned, four-page foldout of archival paintings featuring the most historically important commercial aircraft.

Randy Johnson came to the project as longtime editor of Hemispheres, United Airlines’ award-winning inflight magazine. Co-author David Fisher became the youngest reporter in the history of Life Magazine. He is the only writer ever to have a work of non-fiction, a novel, and a reference book offered simultaneously by the Book-of-the-Month Club.
William Garvey is a licensed commercial pilot with instrument, multiengine, seaplane, and glider ratings and editor of Business and Commercial Aviation magazine. He’s been affiliated with the TV program Aviation Week, was Editor-in-Chief of Professional Pilot magazine, and Editor-in-Chief, and currently a columnist, for Flying magazine. 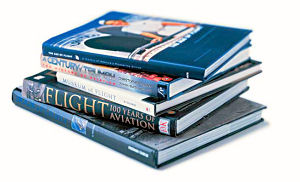 “A worthy and magnificent tribute to a proud company and one of the world’s great air carriers—perhaps the greatest.”—Aviation author William Mellberg, author of Moon Missions: Mankind’s First Voyages to Another World, and Famous Airliners: From Biplanes to Jetliners, the Story of Travel by Air

All photography copyrighted by Randy Johnson. Permission and credit required for reproduction or other use.
Contact Randy about his stock library of international travel, adventure, and Southern Appalachian photography.