The “ground-breaking” early guide to downhill skiing, cross country skiing, and winter hiking in the South is still available with plans for a new edition from the University of North Carolina Press by 2018.

“Southern Snow is one of the best regional nonfiction titles out there.”— David Perry, former University of North Carolina Press editor-in-chief.

First published in 1986, the book was Randy’s first and “I put a lot of passion for winter sports into it,” he says. One of the reasons he moved to the Southern Appalachians to manage the backcountry of Grandfather Mountain through the 1980s and early 90s was his discovery of the Boone area during “a search for Southern snow. I loved snow and cold and found myself heading to New Hampshire’s White Mountains for winter mountaineering, then becoming a cross country skier and searching the South for snowy peaks.”

The book includes unexpected chapters on lesser-known topics such as “The History of Southern Skiing”—a story as surprisingly rich and contemporaneous with the birth of the sport in snowier regions like New England. Who would have imagined that North Carolina’s Beech Mountain saw its earliest skiers in the 1930s! Southern Snow is the definitive text on the history of skiing south of New England. As the region’s expert on Southern ski history, Randy has known many of the region’s pioneers—the people, who, he has written, brought skiing south on the “dreams of true believers.”

The “Climate of the Southern Snow Belt” chapter tracked the white stuff all over the region to surprisingly New England-like depths. A reviewer at the National Oceanic and Atmospheric Administration called the research “the definitive research on Southern Appalachian winter weather.”

One chapter covered driving in the snow, and others featured the state of downhill and cross-country skiing in the South, as well as winter hiking and mountaineering. Extensive state-by-state chapters directed readers to write-ups on the region’s downhill ski areas, cross country ski centers, and snowiest trails for hiking and Nordic skiing.

Want a copy of the “classic” old book now? It’s not too “out of date” from the standpoint of the history, climate, and general areas it recommends. Check it out on Amazon. Used and even new copies still seem to be available.

Take my tour of Roan Mountain above, my favorite cross country ski site.

In this old but heavily viewed video, I teach the basic techniques in lesson at Moses Cone Memorial Park in Blowing Rock, North Carolina. I’ve taught hundreds of people to ski as a member of the Nordic Professional Ski Instructors of America. Tom McAuliffe reports.

Randy’s winter programs for ski and outdoor clubs or shops often focus on “Southern Snow” topics and photography, so check out his list of appearances—or propose a photo presentation and book signing for your organization or ski/outdoor shop. 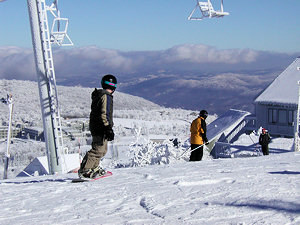 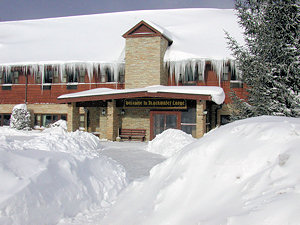 All photography copyrighted by Randy Johnson. Permission and credit required for reproduction or other use.
Contact Randy about his stock library of international travel, adventure, and Southern Appalachian photography.